Your teeth aren’t the only thing you need to care for in your mouth, your gums demand some attention too!

Built-up plaque and bacteria can cause your gums to inflame, a condition called gingivitis which can escalate to worse diseases and may even cause receding gums or cost you a tooth!

While we brush our teeth daily, what do we really do for the gums? Let’s get real, flossing before a visit to the dentist isn’t going to cut it (and we’re not fooling anyone).

Hence, the mouthwash or oral rinse! It’s easy, it’s fast, and it gets the job well done!

Today, we’ll be helping you get your hands on the best oral rinse for gums to keep them clean, healthy and fresh.

So without further ado, let’s dive in!

What Is The Purpose Of Mouthwash?

Mouthwash is a liquid intended for local oral use, so it’s not meant to be swallowed.

We can trace its basic concept thousands of years back to ancient Chinese and Ayurvedic mdicine which first referenced the usage of natural herbal ingredients to sanitize the mouth and get rid of bad breath.

They used common ingredients such as vinegar, peppermint, and turmeric, some of which are still used in modern days.

Mouthwash is also known as an oral rinse and it’s an aqueous solution that can be highly beneficial in cosmetic aspects such as masking and covering off-putting mouth odors without treating the root cause of the problem.

An oral rinse or mouthwash shouldn’t be used alone in substitution conventional oral hygiene methods including brushing and flossing. However, it should be an integral part of your oral care routine.

Such an addition is proven to provide a significant increase in the healthy state of your gums.

How Does Mouthwash Work On Gums?

So how do mouthwashes work? Well, let’s see.

To break down plaque and kill bacteria, fluoride is typically used thanks to its acid reduction abilities. It also strengthens and repairs lost enamel of teeth. But if we look into more specialized oral rinses for gums, we can mostly find chlorhexidine or hydrogen peroxide.

Together, they work very efficiently on protecting as well as treating gums.

Keeping your gum healthier or simply improving your oral hygience routine by addin a mouth rinse, couldn’t be any simpler.

By buying one the best antibacterial mouthwash listed below and adding 1 minute to your oral care routine each day, you will have success. 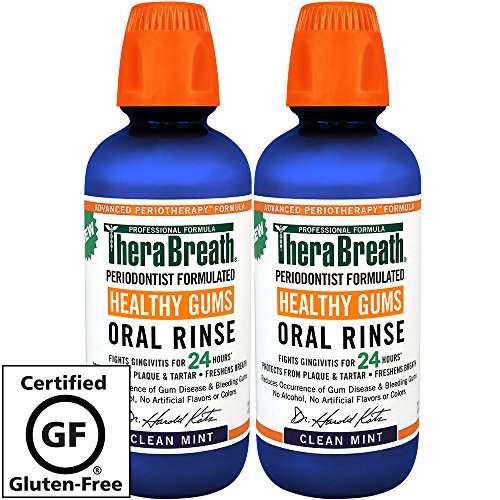 Developed by Dr. Harold Katz, founder of The California Breath Clinics, this mouthwash is one of the highest-rated products out there (and we couldn’t agree more).

It’s great for gum problems including gingivitis and bleeding and addresses gum issues related to pregnancy, menopause, diabetes, as well as other conditions.

It does exceptionally well when it comes to bad breath, soothes and maintains gum protection for 24 hours straight.

Certified gluten-free, vegan and Kosher, so almost anyone can use this oral rinse. TheraBreath offers you a pretty sweet bargain on 2 large bottles with a money-back guarantee in case you’re not satisfied. 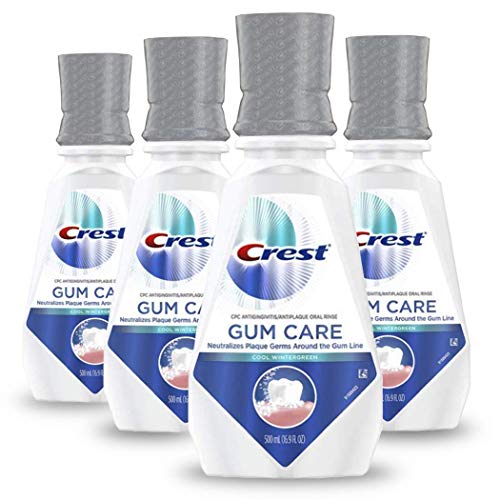 The folks at Crest believe that a healthy mouth starts with gums, and this really shows through their carefully formulated Gum Care oral rinse. Promising to be a valuable addition to your gum hygiene routine.

It’s an alcohol-free oral rinse, which saves you from the over-dryness effect of alcohol. It helps reduce gum inflammation as well as gum bleeding. Leaving you with kind of a soothing sensation, which I personally find to be comforting.

It neutralizes plaque and germs along the lining of your gums, and thus prevents early signs of gum disease. Plus, the cool wintergreen flavor feels like a fresh breeze through the mouth.

If you don’t see results, Crest grants refunds within 2 months of purchase. 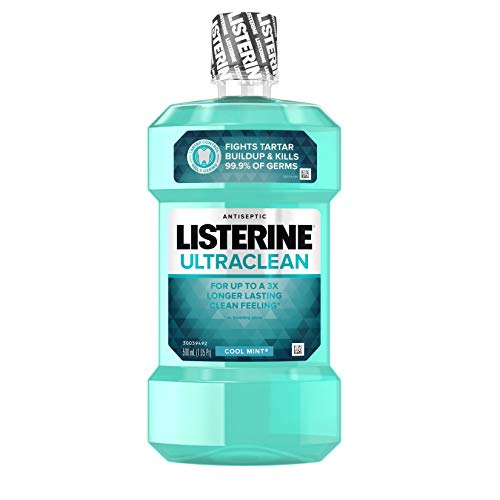 You must be living under a rock if you’ve never heard or seen Listerine. It’s the one brand that everyone seems to know and trust, and rightfully so too!

The super clean feeling provided by Listerine can’t be found with any other brand, although many have tried.

This particular version, Ultraclean, carries all the usual benefits of original Listerine which automatically sets it as one of the best antibacterial mouthwash options on our list.

It has an arctic mint flavor with Everfresh technology which triples how long the fresh clean feeling lasts.

However, they supposedly added a certain ingredient targeting tartar build-up to protect your gums and help fight gingivitis. Unfortunately, we can’t name this ingredient as it hasn’t been disclosed.

This sort of leaves people with a choice of either trusting a reputable brand or calling it a marketing stunt. They don’t even need it, I mean, the stuff works, we’d just love to understand how!

Listerine recommends using its mouthwash for 30 seconds twice a day. That means this 1.5-liter bottle would give you around 6 weeks of gum care. 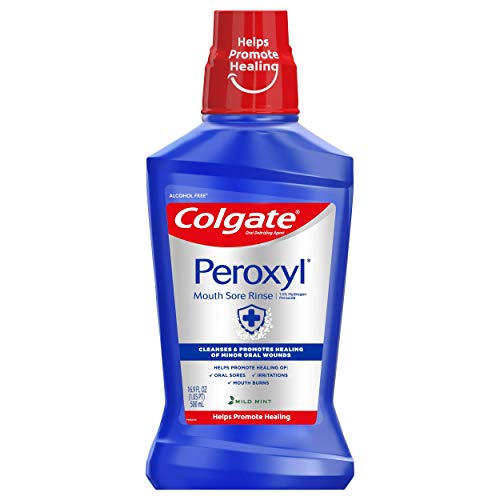 Next up, another brand that’s also quite popular which is Colgate. They present their own approach to gum care with the Peroxyl Mouth Sore Rinse.

The first thing you can notice is that Colgate makes it loud and clear they use hydrogen peroxide in their formula, 1.5% to be exact.

Other than that, this mouthwash is free from alcohol and comes with a mild mint flavor, giving it a nice taste which ensures patient compliance. 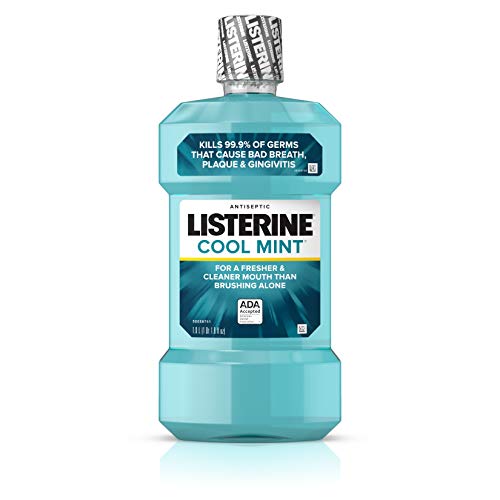 Last but definitely not least, one of the best mouthwash for plaque contenders, Listerine delivers yet another solution to take care of your gums around the clock. Presenting the ADA-accepted Listerine Cool Mint Antiseptic Mouthwash.

This oral rinse works like a charm for gums, killing 99.9% of bacteria and clinically proven to reduce plaque by up to 52% more than brushing and flossing alone. As well as controlling gingivitis by 21% more.

This combo is great news for those suffering from gum sensitivity.

With a refreshing mint flavor, it provides 24-hour germ protection against nasty breath and leaves you with signature Listerine cleanliness.

If you use it twice daily, this 1.5-liter bottle can last you 5 weeks, which makes for great value for money.

Why Should I Use Mouthwash?

The reason you should use a mouthwash should be pretty obvious by now, and chances are you’re already set on buying your own best mouthwash for gums. But just incase you are still deciding, here a few extra advantages:

How Should I Use Mouthwash?

As to how you should use your oral rinse, you should first make sure you have already brushed and flossed your teeth.

This clears up food particles, plaque and bacteria as much as possible before you go in with the mouthwash so it has maximum effect.

Next, you need to accurately measure the amount of mouthwash you’ll be swishing around your mouth. You don’t want to use too little that it loses its purpose, or go too big so you accidentally swallow the solution.

About 20 milliliters should be adequate for each gargle. Besides, you can even find dispensers that’ll provide you with the right quantity whenever you need it. This isn’t something to simply guess.

However, what you can weigh on, is how long you’ll keep the mouthwash in your mouth. Ideally, you want to swish from 30 seconds to one full minute. The more time it spends in contact with your gums, the more effective it performs.

As long as you add one the above mentioned best oral rinse for gums to your oral hygiene routine, you’re already a winner!

That being said, our vote this time goes for the Colgate Peroxyl Mouth Sore Rinse to take it home. It may be expensive, but it’s reliable, powerful and tastes great. Wll worth the money spent.

However, if you’re looking for a solid affordable choice, you should totally go for the Listerine Cool Mint Antiseptic Mouthwash.