We all know the importance of dental hygiene and taking care of your teeth.

People who wear braces find it the most difficult to keep a strict oral hygiene regimen (particularly flossing) and more often than not disregard their oral hygiene.

Unfortunately they are most prone to decay and gum disease.

So let’s explore the best way to clean braces with ease and efficiency.

Why is it so hard to clean teeth with braces?

It is well known that braces present a problem when it comes to oral and dental hygiene. That is because of the brackets attached to the teeth, the wire passing over them and the metallic rings (also known as bands) that encircle the posterior teeth.

Food often gets trapped between the teeth as well as between the brackets and the gums. This becomes a nightmare to clean.

So what is the best way to clean braces?

First you should know that there are 2 main types of braces nowadays, which are fixed braces and removable braces.

Fixed braces are the traditional metallic braces or the more recent clear braces that are attached to the surface of the teeth (meaning you cannot remove them).

Removable braces (also known as INVISALIGN technology) are clear plastic aligners that are placed on the outer surface of teeth, and can be removed at will. As you can probably imagine these are far easier to clean.

How to clean removable braces

Simply remove the aligner and wash it under running tap water. You can also use a soft toothbrush to clean them, but take extra care since they are very delicate. They could break in your hands while you’re cleaning them.

Some people would rather use an ultrasonic cleaner or a detergent bought from the pharmacy (as those used in cleaning dentures) and some even use baking soda to clean them. But these are really not necessary if you remove the braces each time you attempt to eat, and brush and floss after each meal before putting them back on.

If you follow this routine, it is very unlikely that the aligners would trap any food debris or cause any problems regarding gum disease or decay.

How to clean fixed braces

This is where it gets tricky. You cannot remove the brackets and the wire, so you will have to work your way around them. You also have to take extra care since additional pressure could remove the wire from its place or even break the brackets.

How to keep teeth clean with braces

We suggest you use the following braces cleaning tools:

The regular toothbrush could be effective if used correctly but most of the time it fails to clean properly under the brackets and wire. Which is certainly not enough to clean between the teeth or in the posterior region where the band is placed. This is why most orthodontists would recommend you use an electric tooth brush.

We recommend you use the latter. Because the reciprocating type tends to break the bond between the brackets and the teeth, and is also quite harmful to the gums when used incorrectly.

Mouthash is an aid to brushing and flossing. It should be used under strict recommendations from your dentist. But most dentists would agree that using mouthwash with braces is essential.

The liquid can go easily under the brackets and between the teeth. It not only cleans these areas but coats the surface of the teeth with a protective layer to decrease the chances of harm even further.

Do not neglect flossing

Most people neglect flossing even though it is of the utmost importance. Almost all people who wear braces find it incredibly difficult and annoying and so they simply just stop doing it.

We understand that using string floss is incredibly difficult and frustrating and it takes forever to clean between the teeth. So why not just use a different method?

Other methods of flossing could prove to be far easier and more effective. This includes floss threaders, which is the same as string floss, but has a rigid tip to easily pass the string under the braces and between the teeth. And even interdental tooth brushes, which look like toothpicks but made of bristles instead of wood. They are capable of passing easily and cleanly between the teeth.

Using these methods will certainly give you a brand new and simpler experience.

Waterpiks are the solution to all your problems. This amazing device uses a constant strong jet of water that can pass between the teeth regardless of the presence of the brackets and the wire.

The strong jet is also very adept in cleaning under the brackets (in the area between the brackets and the gums) which could be the most difficult area to reach.

The small and bendable tip could also easily reach far back in the mouth to clean between the metallic bands and the surface of the teeth. So there you go, all your problems are solved.

Water flossers have been scientifically proven to reduce gum disease and gum bleeding in braces wearers to almost the third when compared with traditional string floss. So we recommend that waterpiks go hand in hand with braces wearers.

So when it comes to selecting the best way to clean braces, all you have to do is know the type you’re wearing.

For removable braces the process is simple enough. But when it comes to fixed braces, use the ultimate combination of an electric toothbrush, a fluoridated mouthwash, and the ever so popular waterpik. 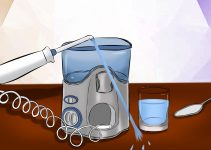