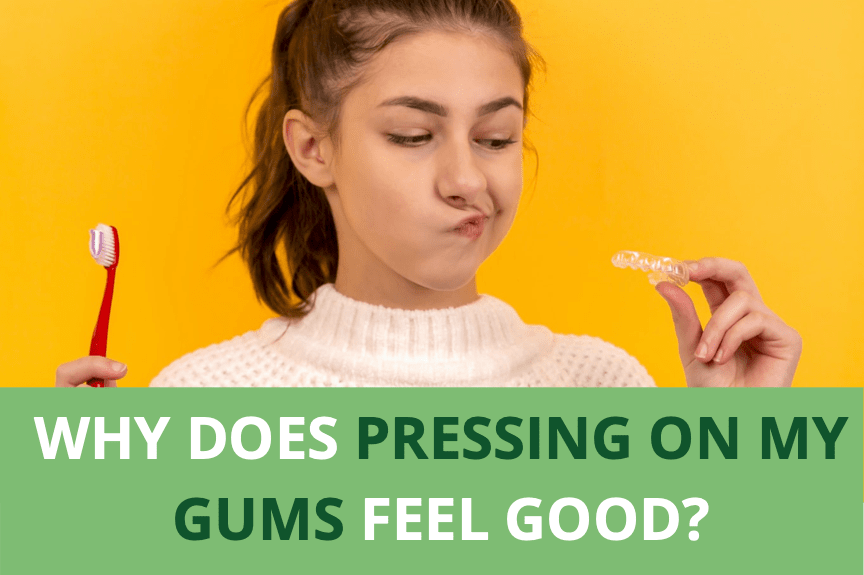 There are a million reasons for your mouth pain, ranging from decay to sensitivity and even cancer. One of the most common reasons for a painful mouth is inflamed gums.

Almost everybody in the world has a certain degree of gum inflammation (also known as gingivitis). It could be very mild showing no symptoms, or so severe that your gums hurt and burn almost all the time.

When the gums are this inflamed, you would expect that even the slightest touch would cause severe pain, but shockingly enough, in some cases, it is the exact opposite, where touching and even applying pressure on your gums can actually get a good feeling, even pleasure.. go figure !!

Quick Navigation
Reasons behind gum pain
Solving the mystery of why touching gums can get a better feeling
How to permanently fix the problem
FAQs
What causes sharp pain in the gums?
Why do certain types of pain feel good?
Why do my gums Throb after flossing?

There are a few reasons why your gums would hurt, including:

Well, we now understand why your gums would hurt, and it is only common sense to assume that applying pressure would only serve to increase that pain, so why does sticking a toothpick between two teeth feels good rather than hurt more?

what is the reason behind this seemingly strange sensation of pleasure?

The answer is very simple: releasing the pressure from inside. Imagine a balloon that is completely filled with water to the point it would rupture.

The answer is severe pain.

Now imagine that you apply pressure to this balloon so that it releases some of that water through its nozzle, and in turn alleviate the pressure on this balloon with a large number of nerve endings .. wouldn’t the pain go away?

This is exactly what happens inside the inflamed gums.

A main component of inflammation is edema (which means fluid building up inside the gums).

This edema presses on the highly innervated gums causing them to hurt.

When you use a toothpick or even your fingers to press, some of that fluid gets released or at least relocated to areas where the nerve supply are not so high, and in turn, you get a good feel of relief, but only momentarily, because when you release your fingers, the fluid builds up again very quickly, and we are right back where we started.

In other words, this is only a temporary fix, a patch on an unclean wound.

The only way that the condition would subside completely is for the cause of the problem to be addressed.

How to permanently fix the problem

In cases of gum disease, prevention is definitely better than cure.

Gingivitis is quite difficult to treat, but so easy to prevent. All you have to do is take proper care of your teeth and mouth and apply a strict oral hygiene regimen.

Brushing twice a day, together with flossing twice or 3 times a week, and using mouth wash as your dentist prescribes would certainly reduce the chances of ever getting gum disease, as well as protect your gum line from a recession which could cause even more pain.

However, if the problem already occurred, here is what you should do:

Final words, and we could not stress this hard enough, it is so much easier to prevent the disease from occurring that deal with its ramifications. In other words, maintaining proper oral hygiene would save you a lot of hassle.

Why Do I want to Scratch my gums?

The gums receive the same sensation from the brain as the skin. So when your skin gets irritated (like when you get pinched by a bug), you feel the need to scratch.

The same goes for the gums. When they irritated through inflammation, you feel the need to scratch them.

What causes sharp pain in the gums?

The reasons for gum disease are numerous, such as gum disease, pockets, spacing, vigorous brushing and flossing .. etc. , as explained earlier.

Why do certain types of pain feel good?

This is a false sensation. Applying pressure to inflamed gums releases the pressure from that area, but only for a little while, and when this pressure is let-up, the fluids return to their original position and the pain returns.

Why do my gums Throb after flossing?

This can be one of 2 reasons, either you floss too hard, injuring the gums, or you actually floss just right, and that throbbing sensation is actually your gums healing themselves, so you just need to revise your method of flossing.