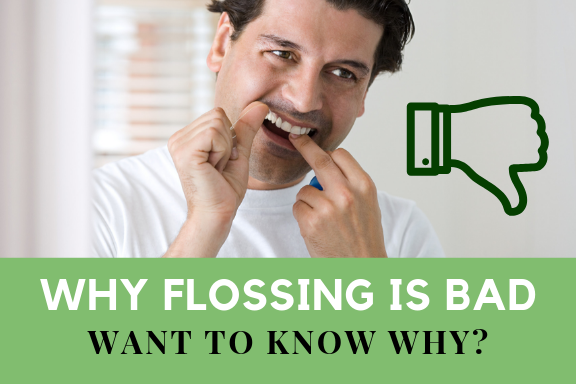 This could come as a bit of a shock to most people but flossing can be bad for you.

Every one including dentist have always promoted the benefits and values of flossing and advised people to include the act in their oral hygiene regimen.

So when you come across an article that tries to discredit that well known piece of information. Even explaining why flossing is bad, we expect that this would put your mind to work.

But fear not, because we are not talking about the act of flossing itself (meaning the act of cleaning between the teeth). But on the use of certain methods of flossing, particularly traditional string floss.

So in that context, it is not to that all flossing is bad, just certain types. We all know that brushes are unable to clean 100% between our teeth. They are only equipped to clean the visible surfaces and not the shielded areas under the contacts of teeth.

Only flossing is capable of such cleaning and is so important since most diseases of the mouth such as cavities, gum disease and pockets arise in those areas. So again we stress, flossing is incredibly important.

Now getting to the main point.

Why flossing is bad when you use string floss

We have all been accustomed to the presence of string floss. The good old piece of string that is forced between the teeth, and sweeps the remnants and debris away effectively (which is why flossing smells bad too). Or so we thought!

So let us explain why flossing could be bad for you if you are using traditional string floss.

Is it really that bad to use string floss?

It is not a question of bad, but the real question is  “is it truly effective, or am I just wasting my time?“.

When we use a piece of string for flossing, we clean the surfaces of the teeth facing each other which cannot be reached otherwise, and in that aspect, string floss is quite effective. However, there is another aspect that most of us don’t consider, that is the area under the gums.

Can string floss clean under gums?

Plaque and debris build-up everywhere, either on the teeth surface or between the teeth, and even continue to build in the invisible and unreachable area under the gums.

That is an area that string floss simply can’t reach. The bacteria there will grow and strive undisturbed, causing all sorts of trouble and diseases.

In fact, when you use the string you are actively forcing the debris (together with the bacteria) into these deep areas. That is when only a professional such as a dentist or hygienist is able to fully clean.

Add to that the fact that because some people don’t floss regularly, their muscles lose the memory of the act. Therefore when they force the string between the teeth, they end up tearing and injuring the gums in the process. So you are not only not benefiting from flossing, you are being harmed as well.

Is flossing necessary then?

Understanding all that, you may think that flossing is entirely harmful and would disregard the act altogether. But that is where you would be wrong. Here is a few problems that could arise if you don’t floss regularly.

Gum disease almost always begins in the areas between the teeth. When the bacteria and plaque are not cleaned well enough, they start to release toxins that could initiate gum disease. The consequences are bleeding, swelling, bone loss
and ultimately the loss of teeth.

Because these areas are shielded, the bacteria could easily work without disturbance, producing acids that eat through the protective layers of teeth. Resulting in decay and cavities.

Gum recession happens when the gums start to pull away from the neck of the teeth, exposing the sensitive root underneath them. It has many causes, one of which of course is bone loss from improper oral care, which is mainly due to not taking proper care of your oral hygiene.

“Why is not flossing bad for your heart?” you say. Well the link is well established between periodontal disease and a variety of general health problems. These consist mainly of joint problems as well as eye disorders, and recently it has even been linked to heart disease. So in other words, not flossing could damage your heart.

Other ways to clean between your teeth

So we established that cleaning between the teeth is important and that using string floss is a source of trouble.

Here is a list of other methods of flossing available on the market:

Why flossing is bad, answered!

So the choice is yours. You can select the method that appeals to you the most. You should now have enough information about the possibly strange topic of “why flossing is bad” and by now you know we mean the method, not the act itself. 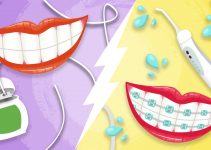 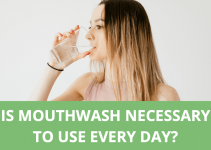