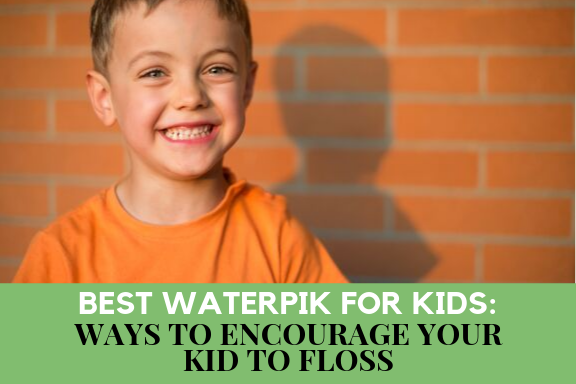 Buying the best waterpik for kids is one way to foster good dental habits in your children.

The truth is, toddlers have an equally hard time remembering to floss their teeth, as adults do.

Part of the reason why this happens is that parents and caregivers don’t place a lot emphasis on flossing as they do with activities like doing homework and following a proper nutrition.

The other reason is that some kids are just too lazy to floss.

So how can you encourage your children to floss? The first step is to get them the right tools.

Here are 4 of the best water flossers for kids. 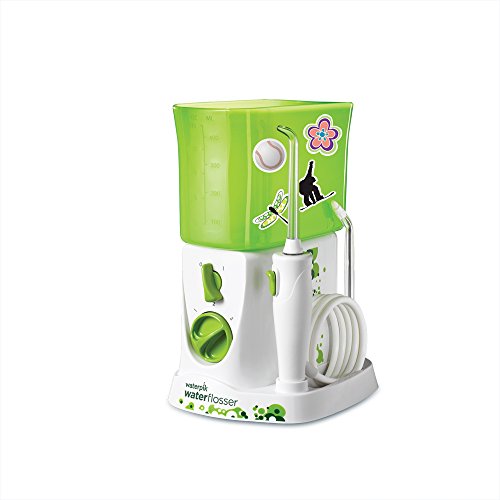 Waterpik is one of the few brands that has a specific water flosser for kids: WP-260. As such, it’s equipped with kid-friendly features that make flossing both easy and fun for toddlers.

For starters, it has 3 simple pressure levels ranging from 10 to 80 PSI. The flosser uses a control system so that it doesn’t end up with a pressure that is too strong for your child.

It also comes with two tips. The jet tip is for general application, that is, providing a deep cleaning between teeth. The orthodontic is tailored for kids with braces or other orthodontic treatments.

The reservoir of this water flosser is another aspect that makes it stand out. It has a capacity of 15 oz, which translates to more than 400 ml. Which means your child can floss for a long time without having to refill the tank too frequently.

If you’ve been shopping for a slightly cheaper dental flosser, this unit by Anjou gets the job done without compromising on quality.

The device injects water from the 360-degree spinning nozzle at a frequency ranging from 1400 to 1800 times per minute. This helps it to clean all areas of your mouth thoroughly. And the good thing is that you’ll be able to buy many units for all your kids without breaking the bank.

Another aspect that makes this water flosser ideal for children use is the pressure range. In particular, the pressure can be adjusted between 30 and 110 PSI. This means kids can always set the pressure intensities that fit their needs.

Apart from pressure adjustability, kids also get to choose from three modes. The normal mode is perfect for general use. The soft mode is tailored for sensitive teeth. Lastly, the pulse mode aids in massaging gums, which in turn, boosts blood flow. 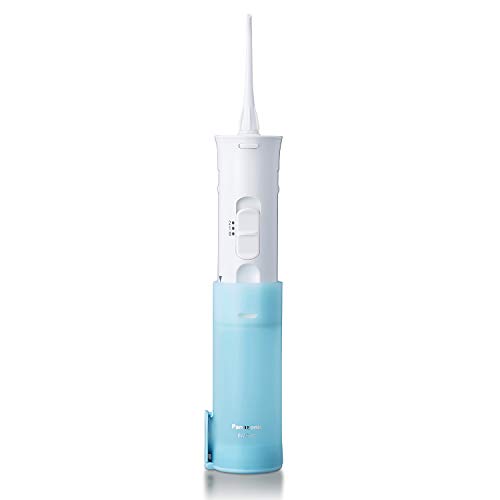 If you and your child are always on the go, this highly-portable Panasonic EW-DJ10 is one of the best waterpik for kids.

It has a cordless and collapsible design, which makes it easy to pack in a school bag or purse. Plus, it’s small footprint means that it takes up very little space on a sink top or counter.

Despite its compact design, this is a pretty powerful gadget. It works by generating rapid and targeted streams of water to remove all food residue, plaque and bacteria.

Like the other water flossers in our review, this one also has varying pressure settings.

With the jet mode, expect a full-pressure water flow that helps to remove large-sized food particles. The regular mode on the other hand delivers strong pulses to get rid of smaller particles. Lastly, the soft mode employs the least amount of pressure, and this makes it suitable for users with sensitive teeth and gums.

If you have a toddler who is of walking age, then you understand how carefree they can be at times. Luckily, Abox understands this which is why they’ve designed a very sturdy countertop water flosser.

This unit is fitted with 4 ultra-strong and slip-resistant feet that adhere to the sink. Hence preventing it from toppling over. The design of the base also aids with noise reduction.

Even better the Dental Oral Irrigator has a waterproof design, meaning it won’t get damaged with just a few splashes of water.

The water tank of this flosser is another noteworthy feature. It can hold up to 600 ml water which is one of the highest capacities we’ve come across. In addition, this reservoir is equipped with a double seal ring to prevent water from leaking.

How to make flossing fun for kids

Flossing likely isn’t the most fun filled activity your kid enjoys, hence why they will either avoid doing it or just not be interested at all. Here’s some tips to change their perspective on flossing.

Parents and guardians are the best role-models for kids. In fact, children pick up most of their habits from those they live with. If you only floss once per week, your child will want to do the same. So if you want them to understand that flossing is important, then floss alongside them and be consistent.

This is because kids find it easier to tackle challenges when they’re receiving support from their loved ones.

You can turn brushing and flossing into a family routine that you do twice per day. Besides, this will also help you to keep up with your own dental regimen. No more mumbling when your dentist asks how often you floss.

Make it a game

Competition inspires motivation and success. When your child has to race against the clock to floss within a specific duration or compete against their siblings, they’ll be more inclined to take part in this activity.

Thus, you can turn flossing into a fun game where you keep score of their weekly flossing time or award points to the fastest person. Or you can incorporate a song or story to complement every flossing session.

Regardless of what you do, the goal is to make flossing more exciting. This way, they’ll always look forward to it.

Allow them to choose their water flossers

Flossing with a string is hard for kids and it’s too time-consuming. Even if a child has gotten the hang of this traditional flossing technique, they probably won’t enjoy it. Instead of using a string, allow them to pick their best water flosser for kids.

Some of these devices come with kid-friendly features that make it so much easier to floss. Plus, they are more durable and make flossing less time-consuming.

Benefits of buying the best waterpik for kids

Whenever you take your toddler to the dentist, one of the questions you’re asked is whether they have been flossing on a regular basis. Unfortunately, the answer from the majority of parents is a resounding “No”.

Even though you ensure that they brush at least twice a day, as recommended by the American Dental Association (ADA), it’s just not enough.

Here are all the benefits your child could be getting from a routine flossing schedule.

Efficiency of flossing and brushing together

Based on this study, the best approach to dental care is combining brushing and flossing. A toothbrush uses soft bristles to remove any lingering food particles. Toothpaste facilitates this process by killing any bacteria in the mouth.

However, brushing has one major limitation: it doesn’t clean thoroughly between the teeth and below the gums.

This is where flossing comes in. The best waterpik for kids is designed to remove residues between the teeth and below the gums.

The question is: should one brush or floss first? According to the ADA, either order is acceptable. What’s important is that an individual follows the proper techniques when brushing and flossing.

Another reason why you should train your kids to floss is because it helps to protect their gums.

Every tooth is made up of five surfaces and flossing helps to clean two of those surfaces. So if you don’t floss, these surfaces remain unclean, causing plaque to accumulate.

The plaque then generates acid, which leads to cavities and irritation of the gums. Ultimately you may suffer from gum disease and other oral diseases.

By ensuring that your child is flossing his or her teeth on a regular basis, you can avoid the high costs associated with treating dental problems.

Treatment of conditions like gingivitis can cost as much as $3,000 if you account for all the follow-up visits and possible operations. And if they suffer from periodontal disease, you could end up paying up to $8,000.

To avoid such hefty expenses in the long-run, buy the best waterpik for kids and train them on how to use it.

Did you know that poor oral hygiene can affect other aspects of your health?

If your child is not flossing their teeth, bad breath and discoloration aren’t the only things you have to worry about. To understand how oral hygiene affects the body, let’s first look at the immediate effects.

When an individual fails to brush and floss regularly, bacteria begins accumulating on their teeth. Which makes their gums susceptible to infection. The immune system intervenes to combat the infection, causing the gums to swell. If left untreated, the inflation persists.

Over time, the swelling and the chemicals released due to this infection, eat away at the gums and the structure anchoring the teeth. This leads to gum disease, which in turn, makes you prone to a range of other conditions such as diabetes and heart disease.

How often should kids floss?

When it comes to brushing, less is better. One study revealed that applying too much pressure on your teeth or brushing for too long increases the risk of dental problems.

However, the same cannot be said of flossing. More often than not, you’ll find that the reason why people experience pain or discomfort from flossing is because they’re using improper techniques.

Thus, there’s no limit to the number of times your child can floss. But to reap maximum benefits from this practice, they only need to floss once everyday.

Usually, it takes about 24 hours for plaque to solidify between the teeth, though it can harden in a shorter period on the sides of the teeth. So unless your child has food particles stuck between their teeth, there’s really no need to floss more than once per day.

When is the ideal time to floss?

As already mentioned, it takes several hours for plaque to form on teeth. This gives you and your kids the flexibility to pick a flossing schedule that works for you. That said, it’s advisable to maintain consistency.

So if it’s too difficult for your child to floss in the morning, you can have them floss every night. This way, they can remove any food particles that accumulated during the day.

Most experts recommend flossing in the morning. The reason for this is that saliva production decreases at night.

When this happens, the mouth becomes more susceptible to acid-producing bacteria. And as a result, any debris that gets stuck between the teeth at night can have adverse side effects. To prevent this, you can train your child to floss every morning.

Flossing is part of proper dental care and each parent should teach their kids to floss the right way. Not only does flossing remove food particles that accumulate between teeth but it also helps to prevent gum disease and other potential conditions.

To help your child get started on the right path you should get them a water flosser for kids like the WP-260. This device has adjustable pressure levels and graphics that will draw your kids attention, making the whole process interesting nd enjoyable. The large water reservoir and ease of use are other reasons why we regard this to be the best waterpik for kids.