Water flossers (aka waterpiks) are the latest in the advancement of oral hygiene technology.

This amazing device has truly brought the oral hygiene and cleaning game to a whole new level.

Numerous studies have been directed towards how effective water flossers can be.

But a question that has been on the minds of everyone (users and dental professionals alike) is “does water flosser remove plaque?”

And if this is the case “does waterpik replace flossing?”

What exactly is plaque?

Plaque is a thin biofilm that is deposited on the surface of the teeth when food debris is left uncleaned for a while. It is quite sticky and would need significant pressure from a toothbrush to be removed. Until water flossers were invented.

So does water flosser remove plaque?

The answer is, without a shadow of a doubt, it does!!

Most studies over the past decade have been directed towards measuring the effectiveness of water flossers versus traditional string floss. All have found that string floss couldn’t hold a candle to what a water flosser can do.

In fact, these studies have proven that water flossers reduce gingivitis by more than 50% when compared to string flossa. And is twice as better in reducing gum bleeding.

It is also a savior for people who wear braces or have heavy restorations such as crowns and bridges, where they were proven to be 3 times as effective in flossing. Resulting in more than 53% reduction in gingivitis in these cases as opposed to string floss.

How well does waterpik remove plaque?

Some studies however were more interested in the ability of the waterpiks to remove plaque, and comparing them to the effectiveness of other means of flossing in doing so.

The first study was conducted in 2005 to compare between water flossers and traditional string floss as it comes to plaque control, and proved that water flossers removed plaque far more efficiently.

A second study in 2009 was done to confirm these findings. By using an electron microscope it proved that water flossers removed up to 99% of plaque in the treated area.

The final study to tackle this matter was done in 2016. This time comparing the combination of water flossers with toothbrushes vs interdental brushes and toothbrushes.

Again the water flosser group prevailed and the first combination was proved to be 18% more effective than the second one. Particularly in the shielded areas between the teeth.

Water flossers are great for braces, crowns and bridges

So as you can see, water flossers are incredibly effective in removing plaque. Most dental professionals still to this day do not believe in its efficiency, but it is very hard to argue with the numbers.

One more important point to consider is the value of water flossers to people who wear braces, or have bridges or crowns covering their teeth. It is very common for plaque to accumulate underneath braces or bridges and is impossible to clean.

It is already established that water flossers are the solution to this problem as it comes to cleaning between the teeth, where string floss is unable to reach. But with these new numbers, it is entirely possible that water flossers could also solve the problem of plaque control in the visible regions.

Is a water flosser better than a toothbrush?

A traditional toothbrush is very effective in cleaning plaque off healthy unrestored teeth. But with crowned teeth or teeth with braces, it has its limitations. Which is why most orthodontists would recommend their patients get an electric toothbrush.

But what if you already have a water flosser and you can now see how effective it is in removing plaque. Shouldn’t it be enough to remove plaque from these tricky areas and the electric toothbrush is no longer required? Just as thought.

All these numbers prove how strong a water pik is and it raises a very important question:

Water piks use a strong, highly pressurized jet of water to clean plaque (essentially they are a water jet floss gadget). You might think that water is harmless but think of pressurized water cutters, where a strong enough stream of water could very easily cut through metal!

Of course the pressure of water flossers is nowhere near that high, but it is possible (although rare) with incorrect use to damage the gums with water piks. So you need to carefully read the instructions manual and even consult your dentist on the correct way to use these devices first.

Another question that may come to mind is:

Why all the fuss about plaque?

You might think little of plaque and how dangerous it could be, but to dental professionals, plaque is literally their sworn enemy. Almost every disease that can happen inside the mouth can be traced back to plaque. Starting from gum
disease to decay to periodontal disease and even some types of cancer!

Plaque is loaded with bacteria

While you may think of plaque as food remnants only, you should also know that it is loaded with bacteria and micro-organisms that could cause all sorts of trouble.

Not only that, but if it is left uncleaned for a while, minerals originating from the saliva and the food intake start to deposit inside this fil. It then hardens into Calculus, commonly known as tartar.

Tartar is a serious issue not to be ignored

Tartar carries its own set of dangers since it is very hard and sticky. It can only be removed by a professional dentist. The bacteria living inside it secretes a plethora of toxins and acids that cause decay as well as gum disease.

It also presses down on the gums causing bleeding, sensitivity of teeth and begins the process of bone loss. Which could ultimately lead to the loss of your teeth.

So in the end, it is not just the question of “does water flosser remove plaque”, but how effective it is in reducing diseases of the mouth. And if you are wanting to know exactly how to use a waterpik to remove plaque, we recommend you consult your dentist for a demonstration. 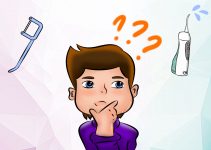 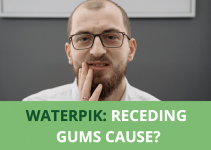