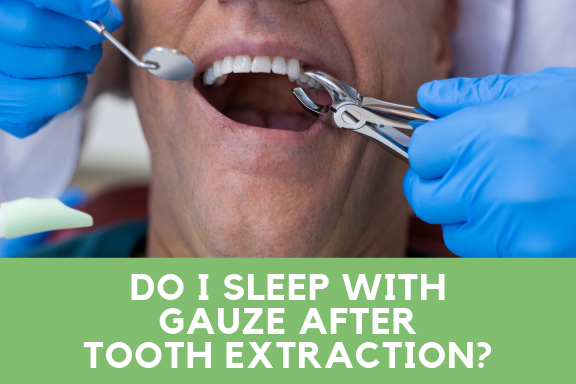 Tooth extraction is one of the most common procedures performed by dentists all around the world on a daily basis.

The procedure itself is quite simple, but it is what happens afterwards that is crucial for your health and well-being.

After the extraction is done, your dentist will give you a few instructions on how to care for that open wound. One of which is to bite down on a piece of gauze for a while.

Purpose of gauze after tooth extraction

The main purpose of that piece of gauze is to control the bleeding, which is expected after a tooth is removed from its socket. It also helps facilitate the formation of a blood clot that is essential for the healing of that open gap.

This process starts within a few minutes after the gauze is placed and reaches its peak performance at about one hour after that. So most dentists would recommend that you bite down on the gauze for about an hour or two max.

After that there should be no need for further compression on the wound.

Do I sleep with gauze after tooth extraction then?

The answer is: Absolutely NOT.

There is a reason behind this particular instruction to remove the gauze an hour or two after extraction.

As we established, the gauze compresses the open wound and limits bleeding from the site. When our bodies suffer a wound (any wound) chemical mechanisms start firing off in the area of the wound. With tooth extractions, this means the open socket in the mouth.

How gauze helps with clot formation

A number of reactions occur and the end result being the formation of a blood clot and subsequently stopping the bleeding. This would happen in all cases, regardless if you use gauze or any other compression method or not.

The gauze helps to keep all these chemicals in place. As well as keep food debris and bacteria out of the wound long enough until a clot is formed. Which is why you would think it that the longer the gauze is kept in the mouth the better.

Therefore do you sleep with gauze in your mouth after tooth extraction?

It is not OK for a gauze to stay in your mouth for any time longer than it is needed to do its job. Because then it will do the exact opposite of its job.

What happens when gauze is left on too long

When the gauze is left for too long, the formed blood clot sticks to the gauze. Therefore when you attempt to throw it out, you are also (inadvertently) throwing out the blood clot as well.

This doesn’t necessarily mean that you would start bleeding again. But what you are risking is something far greater known as Dry socket.

As the name suggests, dry socket is when the extraction socket (the gap left by the extracted tooth) becomes dry or in other words, absent of a blood clot. The blood clots job is not only to stop the bleeding but it is the first stone in the building of healing. Upon which the gums, ligaments and bones build-up to and in the end close the hole left by the absent tooth.

So in simpler words, no blood clot means no healing.

Dry socket is also quite painful, because when the gap is left empty, it starts to trap food particles and debris. The area then becomes inflamed leading to severe pain. If left untreated, dry socket could even lead to death of that part of the bone and it would have to be removed or risk death of a larger part.

How to treat dry socket after tooth extraction

But fear not, the treatment is very simple. All you have to do is go to the dentist, who will make the wound bleed once more (after numbing the area of course). After that you should treat the area as a fresh wound, just as if you had that tooth removed right now.

Only this time, do not keep biting on the gauze for a longer period than you should and make sure you follow your dentists instructions to the letter.

As you can probably guess, all of these instructions have one goal in mind: Keeping the blood clot intact and in position.

Can you sleep with gauze after tooth extraction answered!

The reasons for a tooth extraction are numerous. The most common of which is of course severe decay where tooth restoration is no longer possible. As well as severe periodontal disease where all the ligaments and bones have dissolved. The tooth becomes extremely mobile beyond repair and finally trauma from an accident or a fight.

So if you are unfortunate enough to require a tooth extraction, make sure that you follow the post-surgical instructions as much as you can for proper wound healing. If you ever think “Do I sleep with gauze after tooth extraction” and think that the answer is naturally yes, well, think again! 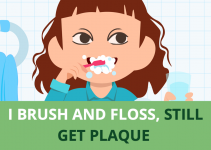