Gum recession is a process where the gums start to pull away from the necks of the teeth, exposing part of the underlying root of the tooth.

You start to wonder as to the cause and definitely how to remedy the condition. No doubt this question has come to mind then “will flossing help receding gums?”

Receding gums is quite common and affects a large sum of the population of both genders. Although it is more common in the elderly. It is however avoidable but not entirely curable.

Short version, yes, flossing helps receding gums. Although the “helping” would be restricted to stopping the progression of the condition, but not reverse it.

In other words, receding gums will not grow back but can certainly be made to stop receding.

To learn more about the relationship between flossing and receding gums, we must first understand the nature of the gums and why they recede and pull away from the teeth.

The gums are not just flesh. They are full of collagen, protein, nutrient cells and many other components.

Most of these collagen fibers are arranged in groups and they pass through the gums in almost every direction. From top to bottom, between the teeth and even encircling the teeth. It is these fibers that are responsible for the shape of normal gums.

These fibers hold the gums tight and strong against the teeth and give that crest shape.

Reasons why gum fibers would be damaged

So as you can probably guess, when something happens to these fibers, the gums would lose their support and can no longer be expected to stand firm and strong. This is how the process of gum recession starts.

When these fibers are cut or injured, the pillars on which the gums are built collapse. So they start to lose shape and droop down, exposing the root.

Here are some reason as to why this happens.

Perhaps the most common cause of recession. When you brush your teeth incorrectly (meaning strongly back and forth rather than a circular motion) you are literally putting a knife to these fibers. This is also usually accompanied by decay in the neck of the tooth just adjacent to the receding areas.

Plaque and tartar build up

Plaque and tartar are the corner stones of gum disease and is formed when you don’t brush and floss for a few days. Tartar is hardened plaque which starts when you go 3 days with no flossing.

With increased tartar build up, it begins to press down on the gums. The bacteria dispersed within the tartar starts to release toxins and acids that could dissolve these fibers and proteins. This starts the process of gum recession.

This is where flossing can be beneficial with regard to recession, as flossing prevents plaque build-up. Which consequently reduces the chances of tartar formation and of course, recession.

This happens with incorrect use of string floss, where the string is forced so hard between the teeth that it cuts into the gums and destroys the fibers. Particularly those that run between and around the teeth. The characteristic shape of the gums in these cases is “flatness”, meaning no peaks and no curvatures.

Can receding gums be reversed?

Unfortunately, when it reaches this stage, there is no going back.

Once the fibers are damaged, they cannot be healed and the recession that was done is now permanent. Which is why flossing is so important in that aspect, because it could stop the disease dead in its tracks before it starts to cause problems that are irreversible.

Of course there are other solutions to the problem with intricate surgeries. But they are quite costly and with quite low success rates. Bottom line “will flossing help receding gums?”, yes to some extent.

The final topic we want to tackle here is the danger of recession.

One might think that the teeth’s being a little taller is not an issue, thinking what’s the worst that can happen. Unfortunately, if you think that, you are sadly mistaken.

The gums are shaped the way they are for a reason. They protect the sensitive roots of the teeth from exposure to the oral environment with all its bacteria and toxins.

When the gums have receded and the roots are exposed, this is what could happen:

The crowns are protected from the oral environment as they are covered by the enamel (which is all minerals and therefore insensitive) but the roots are not. So when they lose the protection from the gums, you would expect some sensitivity particularly with hot and cold food and drinks.

Again due to the fact that the root is uncovered (unlike the crown), this would mean that bacteria, toxins and acids would hit the roots pretty hard. Root decay develops at a much faster rate compared to crown decay, and is much more difficult to treat.

Everybody knows how the gums and teeth are supposed to look like. So when your teeth suddenly seem taller or your gums start looking strangely straight, you would expect people to notice.

In fact, there is a saying in cosmetic dentistry “a smile is half white and half pink” meaning that the shape and color of the gums is just as important as the teeth.

So there you have it. We started off with the simple question of “will flossing help receding gums?”. By now, I think you know your answer. The sooner you start flossing with a correct tecnique, the healthier your gums will remain. 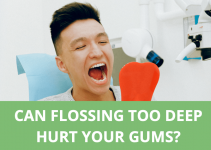